In early 2011, the Department of Social Welfare indicated that it wanted to commence the process of drafting new laws to prevent violence against women (VAW) in Myanmar. Current laws, including descriptions in the Penal Code (1861), indicate that offences involving sexual and gender-based violence do not adequately address women’s experiences of violence, or reflect the contemporary values of Myanmar society. Additionally, legislative reform is needed to bring the body of Myanmar’s laws into greater compliance with CEDAW 1 . In line with international commitments made under CEDAW, the initiative to develop laws on VAW in Myanmar is part of a broader initiative to effect law reform in other areas related to and impacting on gender equality, including laws on property, employment, social security, health, family, and trafficking. 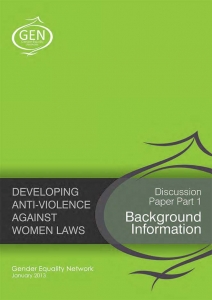 The Case for Anti‐Violence Against Women Laws
Scroll to top