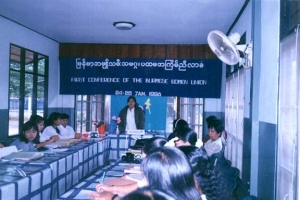 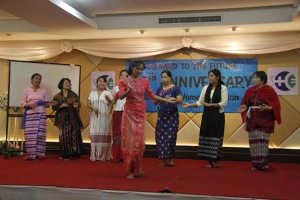 Burmese Women’s Union (BWU) was founded in 1995, in the Thai-Burma Border with a group of young female students who had left the country after the Burma’s military government cracked down on the popular pro-democracy movement 1988. In the same year, membership extended to the China-Burma, India-Burma borders and abroad such as Canada, US, Japan and Australia. BWU’s main goals are to increase the number of active women within the pro-democracy movement; to raise awareness about women’s human rights; to support women of Burma living abroad through education, empowerment and/or satisfying emergency needs.

BWU’s membership is open to women of all ethnic groups and religious backgrounds. We are a multi-ethnic organization that aspires to a democracy in Burma where women play a significant role in the political arena at a national, regional and local level. BWU believes that peace and reconciliation is neither attainable nor sustainable without the full participation of the women of Burma. BWU is working to increase the rights and political participation of all women in civil society, regardless of their ethnic background, sexual orientation, age, religious affiliation, or marital status.