In January 2014, the Women’s League of Burma (WLB) published a report which demonstrated the systematic use of rape by the Burma Army as a strategy to subjugate communities across the country. We documented over a hundred cases of sexual violence in the years since President Thein Sein took office – a number which we believe grossly underestimates the true scale of the problem. Drawing on evidence gathered by our member organisations across Burma, we argued that there are clear links between militarisation, investment and human rights abuses. We also proposed a number of steps to uproot the culture of impunity which surrounds sexual violence, and prevents survivors from obtaining justice. Whilst recent months have seen positive action taken in several areas, the pillars which provide impunity for perpetrators of human rights abuses remain in place. In January, we called for constitutional reform to place the military under civilian control; the establishment of effective judicial and non-judicial  mechanisms to investigate human rights abuses, particularly those relating to sexual violence, and; greater participation of women in the peace process dialogue. 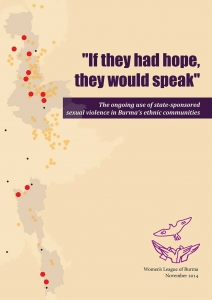 "If they had hope, they would speak"