Women Protesters were brutally violent and attacked during a peaceful protest in Myanmar to end the military coup
Mandalay-The polices respond with violence to a woman protestor in Mandalay. She was arrested and dragged by the policemen to the police car. She is a woman but pulling likes not a human.
We strongly condemn it, Please Stand for her. 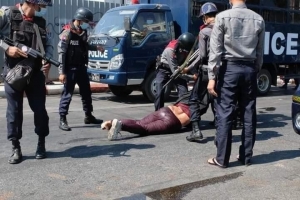